We will use the robot from the first part as it already uses the infrared sensor. The mindstorm's remote control looks like the following: 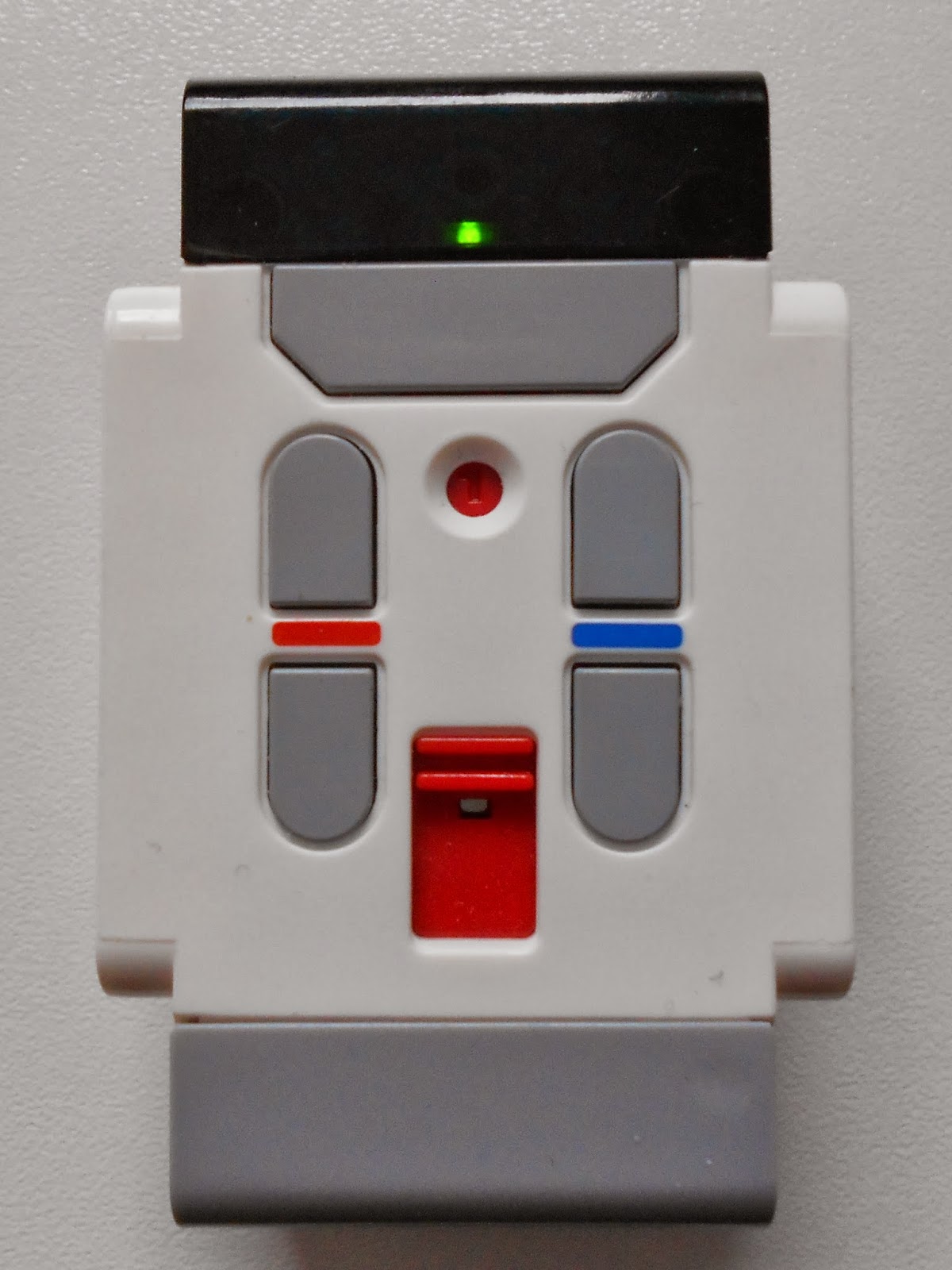 There are two buttons on the left (red) and two buttons on the right (blue). There is a fifth button at the top center which is (in contrast to all other buttons) a toggling button. So if you press it one time, the remote control sends a signal continuously until the button is pressed a second time. Before taking the photo I pressed that button one time to activate the green signal led. We will use that toggle button on the next part of the infrared sensor articles.
The red slider at the bottom center is for selecting a frequency channel. You can select four channels and the current channel is shown in the red circle under the toggling button. 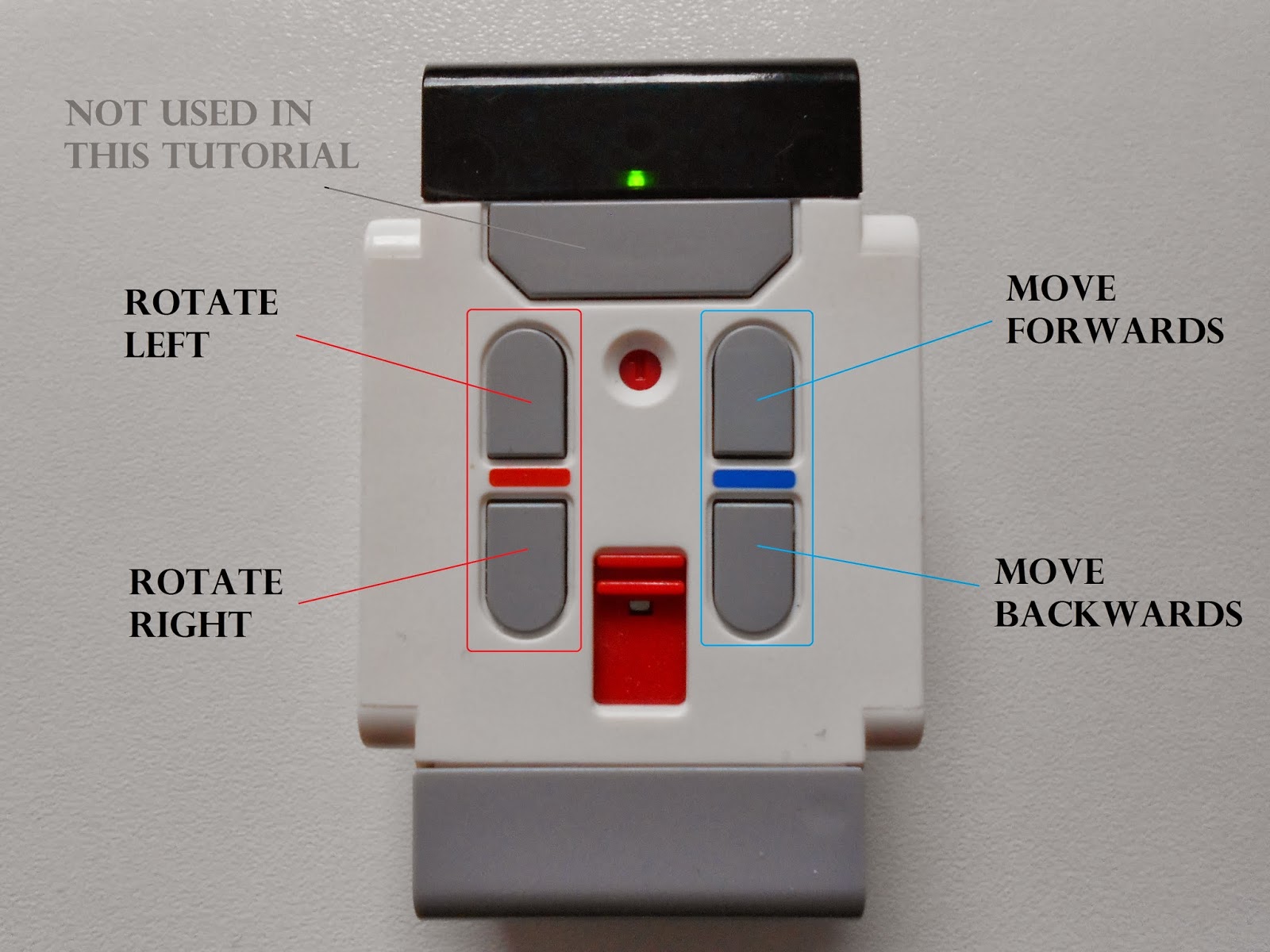 There are two relevant modes for the infrared sensor. The distance mode and the seek mode. We used the former implicitly in the last article and we will use it in this one because it offers the possibility to receive commands from the infrared remote control. The latter can be used to receive the position and the distance of the remote control to the robot (the next tutorial will use the seek mode).

That's it. We don't need RangeFinderAdaptors, RangeFeatureDetectors or anything like that this time. So let's directly jump to the finished code and see how it works.

There are two classes. The Main-class and an InfraredSignalCheckerThread, which extends Thread and contains the logic for received commands from the remote control.

Let's start with the Main-Class:


If you've (hopefully) read our last article on the infrared sensor, you will recognize that the Main-class became a bit smaller this time. We don't have to configure anything on the infrared sensor.
First we create instances for the pilot and the infrared sensor again. The new thing is the InfraredSignalCheckerThread which extends Thread. This class contains all the logic for received commands. The logic is implemented in a Thread-extending class because we want to listen continuously for any received commands. The created instance of the InfraredSignalCheckerThread needs the infraredSensor-object of course and it needs the pilot (because we will control/move the robot corresponding to the pressed button on the remote control).

After we created the instances we configure the pilot and start the checkerThread. That's it. Let's have a look at the InfraredSignalCheckerThread-class now.


Let's have a look at the run-method. As you can see we have an infinite loop. In that loop we get an integer command from the method infraredSensor.getRemoteCommand(0). The given parameter (0) means that the infrared sensor should listen at frequency channel 0 (remember the red slider on the remote control for selecting a channel).
So now the thread is checking for any commands on channel 0 continuously. As next we check which command was sent. The different buttons send different integer values. Here is the documentation from within the EV3IRSensor-class:

And here is the result (watch on youtube for better quality):

Some words on complications that I had while writing the program: After starting the CheckerThread I had to wait around 30 seconds before pressing a button on the remote control. I have no explaination for that but when I pressed any button earlier the robot moved very jerkily. I tried different workarounds like Thread.sleep() and Delay.ms() in the main-method and the checker-thread. I also tried a timer in the CheckerThread which printed a message on the console to tell the user that the program isn't yet ready if he tried to press any button during those first 30 seconds. But none of these attempts worked.
Labels: 0.5.0 components EV3 infrared Lego lejos Mindstorms Mindsuite remote control sensor