In this and in our next postings on our Lego Mindstorms series we will have a closer look at the EV3 color sensor. Today we will use the sensor's ability of detecting and distinguishing different colors.

Meanwhile version 0.7.0 of the lejos api was released. But in this tutorial we will still use the 0.6.0-release as 0.7.0s changes weren't dramatic. So you should be able to run the same program with 0.7.0, too.

The only task the robot will do in this tutorial is: Detecting colors and tell us which color was detected. So in fact we only need the sensor. No motors or something like that is needed. But as we already have a robot from our last articles on the infrared sensor we will take that one and only switch the infrared sensor with the new color sensor. 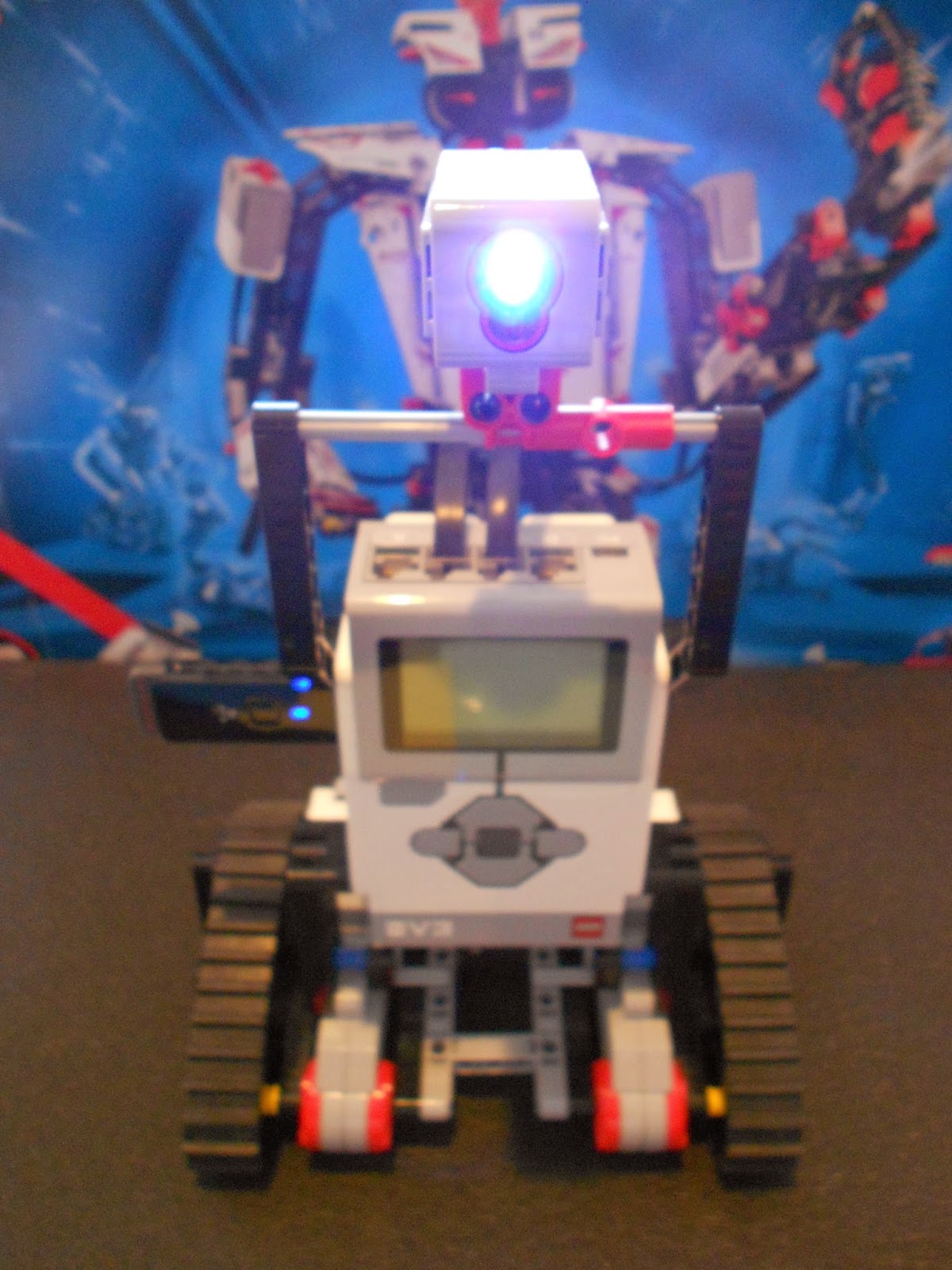 We built a stick with different colors: red, green, yellow and blue. We will hold the different colors in front of the robot's sensor and the robot should give feedback on the detected color by letting the background-LED of the brick's buttons illuminate in the same color. One exception: If blue is detected the program should exit.

We have two classes this time: The Main-class and the ColorRecognizerThread-class. First, let's look at the (really small) main-class:


In contrast to our earlier postings we don't need a DifferentialPilot this time because the robot doesn't have to move. So the only things we do is instantiating a new ColorSensor-Instance and set it to the colorIDMode. Then we instantiate a ColorRecognizerThread (which extends Thread) and give it the color sensor object as a constructor parameter. In that thread we will implement the logic to detect colors and let the LED illuminate in the same color.
After starting the thread we wait for any button press as always so that our program won't just exit after starting the thread.


The constructor is easy as it only saves the color sensor object into a private variable so that we can use it in the run-method.
The really interesting part is the run-method of course, which is called when starting the thread in the main class. We have a deadloop as we want the robot to detect colors continuously. In that loop we get the color found by the color sensor by calling the getColorID()-Method. As you can see it returns an integer. By having a look at the sources (Color.java) we find out which integer value stands for which color:


So, after getting the id we have a "switch case"-statement for that id. If the found color is red, green or yellow we just want the background-LED of the brick to illuminate in the same color (case 0, 1 and 3). Maybe you are curious why the integer parameter for the Button.LEDPattern-method doesn't match with the integer values from the Color-class. Well, the LED doesn't have a pattern for all of the colors. It has 9 different patterns in total (thanks to tigger from the forum for that information!)

If the color blue is found (case 2) I wanted the program to do the following: Turn the light of the color sensor of and exit the program. The api says that we can use the setFloodlight(int color)-method for that by calling it with Color.NONE:

But this throws an exception if you look at the sources of EV3ColorSensor (the default case of the switch-statement):


But I never the less wanted to give some optic signal to show that the program is exiting. Turning off the LED wasn't enough because we already turn it of in our default case of our switch statement in the ColorRecognizerThread. In the end I decided to let the LED display the pattern 4 (blinking green) for two seconds before exiting the program. The threadSleep-method was just created to have the try-catch out of our run-method (because it looks stupid).

And here is the tiny result (watch on youtube for better quality):